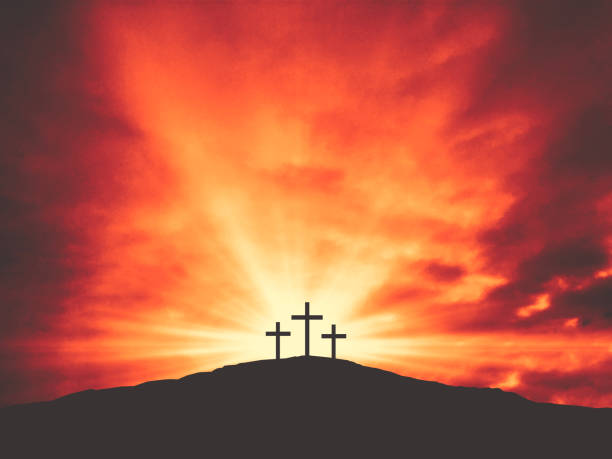 The Gospels in the New Testament have a message of salvation in almost every story.

No wonder Jesus said six times in Matthew, “Have ye not read?”   It was a rebuke and an exhortation that we should all read the scriptures.  Later in Revelation 1:3, it says “Blessed is he that readeth and they that hear the words of the prophecy.”  God wants us to study His word so that we learn the simplicity that is in Christ Jesus.

One lasting image that stays in our hearts after reading the gospels is the image of the three crosses. It represents the entire history of mankind.  It shows the cruelty of fallen mankind and the love, salvation, and redemption of a Holy God.  John 19:17-18 says that Jesus carried His cross to a hill called Golgotha (Calvary), where they crucified Him and two others,  Jesus being in the midst.   All have heard that Jesus died on the center cross, but have you ever wondered why there were three crosses on that day?  Nothing happens by coincidence.

On the first cross the bible states in Luke 23:39, “And one of the malefactors which were hanged railed on him saying, if thou be Christ, save thyself and us.”  He obviously had heard that Jesus was the Christ but he wanted proof before he would believe. This guilty and convicted thief knew he was about to die but showed no remorse or repentance. The bible teaches in Romans 3:23 that just as these thieves, that “all have sinned, and come short of the glory of God”, and in Romans 6:23 that “the wages of sin is death, but the gift of God is eternal life.”   Luke 23:40-42 tells the story of the other thief.  This thief on the second cross rebuked the first by saying, “Dost not thou fear God, seeing thou are in the same condemnation? And we indeed justly; for we receive the due reward of our deeds.”  And then he said unto Jesus, “Lord remember me when thou comest into thy kingdom.”   This thief also had heard of Jesus but knew he was getting what he deserved.  He took responsibility by acknowledging and repenting of living a sinful life.  Then he turns to Jesus and calls him Lord, acknowledging Him as King, asking Him to remember him for he regarded Jesus as his Judge.

The third and center cross was none other than Jesus.  The One that John the Baptist, in John 1:29, introduced to the world as “the Lamb of God, which taketh away the sins of the world.”  Jesus saw and heard the faith of the second thief and responded, “Verily I say unto thee, Today thou will be with me in paradise.” Luke 23:43. The only difference between these two thieves was that one believed and repented and one did not.  Romans 10:13 tells us, “That whosoever shall call upon the name of the Lord shall be saved”, it also tells us in Luke 13:5 that “except ye repent ye shall all likewise perish.”  This second thief had not done any good works. He had no religion.  He did not get baptized.  Titus 3:5 tells us, “Not by works of righteousness which we have done but according to his mercy He saved us.”

He says Come unto me.